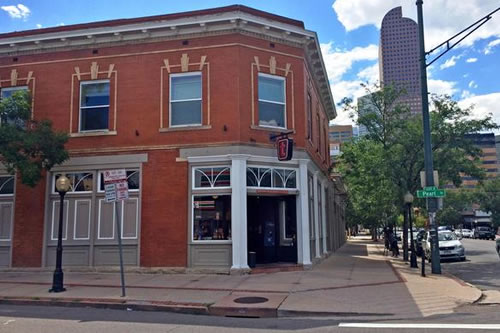 Denver historic preservation advocates are rallying around a turn-of-the-century commercial building in Uptown slated for demolition as part of an apartment complex development at East 17th Avenue and Pearl Street.

As of Tuesday, Historic Denver had gathered more than 200 signatures on an online petition asking developers to “save the historic Tavern Building and urge its incorporation into the new project,” executive director Annie Levinsky said.

Built in 1900, the Tavern building at 538 E. 17th Ave. is currently home to the Tavern Uptown and would be razed to make way for an eight-story, 315-unit apartment project announced last week. The restaurant would remain on the site, reopening on the ground floor of the new building.

“This is a historic building, 115 years old, highly recognized in the community and obviously clearly valued,” Levinsky said. “We would love to see a way to incorporate the old building into the new development.”

Southern Land CEO Tim Downey said Tuesday that the firm is “very open” to ideas for incorporating existing elements of the current building into the new design. Their first internal meeting to talk about the design is in mid-August.

“We could dream up some really neat ways to save part of it or the facade. We’re very open to that and interested in doing that,” Downey said. “I just don’t know how to say exactly what we can do. We haven’t looked into it yet.”

Developers already have begun the process to get a city demolition permit for the building, although no permit had been issued as of Tuesday, planning department spokeswoman Andrea Burns said.

The Tavern building and the adjacent one-story storefront, built in 1902, were included in a Landmark Preservation review in April, the first step in getting a demo permit. That review found that neither building meets the city’s criteria for historic designation, Burns said.

Buildings must meet two of three criteria — history, architecture or geography — to have potential for designation, Burns said. The Tavern met only the architectural threshold, according to the report.

Levinsky said that although the decision has been made, Historic Denver believes there is a case for historic designation.

The Tavern building originally housed a grocery store right on the 17th Avenue street-car line. The architecture is also a “great example” of turn-of-the-century commercial development, with “the big shop windows, the cornice, all these things we love about older architecture,” she said.

Ideally, Levinsky said, Historic Denver would like to see the building become part of the new project, not unlike what’s happening at the Z Block redevelopment in Lower Downtown, where a new office building and hotel are being built around existing historic structures.

“What has really made Denver successful and vibrant is the juxtaposition of the old and new together,” Levinsky said. “As we go through this current building boom, that’s still an important value.”

Tavern Hospitality CEO Frank Schultz said that although his company doesn’t own the building anymore — Southern Land does — he will lobby to save as much of the historic facade as possible, “even if it means I give up some square footage” in the new restaurant.

“I love the building, too,” said Schultz, who is on the city Planning Board. “It was our first Tavern, and my mom almost didn’t want to sell it because of that.”

The Planning Board would see a proposal only if rezoning is requested. Burns said planners are under the impression that Southern Land will not seek a zoning change.

Schultz, Southern Land and Historic Denver will meet soon to discuss the preservation concerns, he said.

“I’m going to do my best with Southern Land. I mean that sincerely,” he said. “There’s got to be something we can do.”
Historic preservationists are trying to save the 115-year-old Tavern Building in downtown Denver, which is slated to be torn down and replaced with an apartment project. (Cohen Peart, The Denver Post)